The New Britain Rock Cats will be renamed in 2016 when the team moves into a new stadium in Hartford, just around the corner. A name the team contest was organized and eventually five names went to the final selection: Hedgehogs, Praying Mantis, River Hogs, Whirlybirds and Yard Goats. The Yard Goats eventually got the most votes.

My first thought was “what on earth is a Yard Goat? Stupid name.” But I learned that it is technically an old railroad slang term for an engine that switches a train to get it ready for another locomotive. The animal angle side of the wordwill probably be used for logos and merchandise.

Next will be a name the mascot contest and a presentation of a new look, designed by San Diego based Brandiose.

The York Revolution of the independent Atlantic League announced that they are raising funds to acquire Phillies first baseman Ryan Howard. They are using the situartion that surrounds the Phillies and Howard to raise money for charity and an opening day attendance boost.

The Phillies are looking to shed Howard, willing to swallow the biggest chunk of his salary: $50 million of the remaining $60 million. “If there are roughly 400,000 people living in York County, we only need $25 from each of them to have the funds necessary to put Ryan Howard in a Revolution uniform,” surmised York General Manager John Gibson. “Some dads might have to dock a kid’s allowance for a couple weeks, big deal,” Gibson continued. In the meantime the Revolution has lowered the amount to 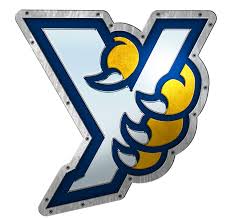 $10 per person to get more money for their charity.

If the team does not get the acquired $10 million to haul in Howard, the amount that has been collected will be donated to Penn-Mar Human Services, the presenting partner of the 2015 York Revolution season.

This shows once again how creative (independent) minor league clubs are to lure fans to the stadium.