Through the decades minor league clubs have been moving from one town to another. But it appears to me that teams are (still) moving rather easily when other towns try to lure them with public funded stadiums. Often other public funded stadiums are left behind and so is the community. Sometimes independent leagues jump in to fill the void, sometimes the void is filled by collegiate leagues. But it also happens that stadiums are left without a tenant. IMHO a destruction of capital.

When you look to teams that recently moved, you can wonder what’s the reason behind those moves.

Take a look at the South Atlantic League’s Savannah SandGnats. The club moved to Columbia and there is one thing that catches the eye. The Sand Gnats were in the bottom half of the “standings” regarding attendance during the last ten years. There were even years in which they even did not make the 100,000 mark. Sure their ballpark wasn’t super duper. It was built in 1926. But isn’t that the charm of baseball, to see a game in a historic ballpark? Or is it that the Facebook and Twitter generation will only flock to a stadium when it has all kinds of bells and whistles? Nowadays, too many ballparks have turned in miniature amusement parks where the game itself has become a secondary interest.

Was it really the ballpark that drew the SandGnats to Columbia or was it perhaps that Savannah isn’t really a baseball town? A third possibility is that the product that the owners of the SandGnats were selling simply wasn’t good enough.

The same with the Hagerstown Suns. The team was drawing very small numbers over the last five years. For quite some time the team is trying to get a new stadium, not only in Hagerstown but at other places as well. Now all ballpark plans fell through, they have committed to Hagerstown for two more years. But you can bet that the owners are looking further to see if they can convince other towns to build and to pay for a new stadium for them. And once again you can wonder if the product that the Suns are selling is good enough to attract fans.

The attendance numbers of the Suns were not always this bad. Sure the team never was in the top half but the numbers started to decline in a bad way after the team made clear that they were looking for a new stadium outside Hagerstown. Can you blame the fans for not showing up with the knowledge that their team may move any time soon? I don’t think so. Through the decades, Hagerstown had several professional teams that got plenty of support, so you cannot say that Hagerstown isn’t a baseball town.

Perhaps one exception to the situation as described above, were the Huntsville Stars. The team played in an aging stadium that was owned by the city. But the place was neglected and dirty and I can imagine that the fans did not want to come there. On the other hand, keeping a stadium clean, isn’t that the task of the tenant? When yo rent a house, you don’t ask your landlord to clean it for you, don’t you? It was a tactic that Walter O’Malley tried with Ebbets Field in an attempt to convince the city of New York to give him land (or sell it for cheap) to build a new stadium.

For sure the Biloxi Shuckers and the Columbia FireFlies will look successful as they will draw big crowds in the first few years because of their new ballparks. But will they still draw big crowds in ten years, when the stadiums are not new anymore?  “Proof” for this point may be my favorite MiLB team, the Montgomery Biscuits. When the team came to Montgomery, the team drew well. In the first four years well over 300K per season. Since 2008 the attendance numbers are going down from 290K+ to 260K+ to 250K+ to 240K+ to 232,466 fans last year. It hurts to see how empty their beautiful ballpark, Riverwalk Stadium, looks at times.

But in the first four years, it was all new and the team won two Southern League championships (which helped of course). But for several years in a row, the attendance numbers are dwindling. But I think that you cannot blame the owners of the Biscuits for this. They also own the Lansing Lugnuts, one of the best drawing teams in the Midwest League. Over the past ten seasons, the team drew more than 300,000 fans every year, so they know how to run a Minor League team. Perhaps some towns are baseball towns, while others aren’t.

You can assume that the reason to move to anther town is not always univocal. As written before, it can be bad management, it can be that a town simply isn’t a baseball town, it can also be that the product that you are trying to sell is not the right fit for the town you are at. There can be a lot of reasons for a team drawing bad. But in all cases, a new stadium, which the city pays for, is only a temporary solution. 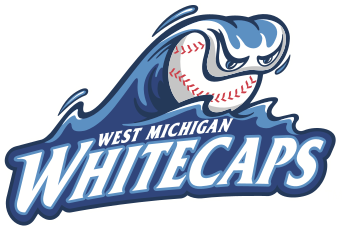 But in a landscape where clubs are moving quick and where stadiums are paid with public money, there is one exception to the rule: The West Michigan White Caps.

The current owners owned the Kane County Cougars and learned a lot from that period. They moved the team from Wassau to Kane County’s Event Park, a city owned facility.
After a while they sold their shares of the Cougars and started to create a busniness plan. With this plan the notion came that they wanted to own the ballpark instead of renting it. So next to buying a ball club, the owners financed the construction of the team’s stadium.

The big advantage of a private owned facility is that you don’t have to discuss changes with the city, the county and the state. According to one of the owners, Lew Chamberlin, they can change things to the ballpark in a way they think is best.

Taking this into consideration, you can wonder why a club like the White Caps is so successful business wise. In 2015, the club was third in attendance behind the Fort Wayne Tin Caps and the Kane County Cougars, with 391,055 fans passing the turnstiles.

Perhaps team owners should take a look to the White Caps with a private owned ballpark, with owners that do not ask the community for money, with a team that is committed to the city of Grand Rapids.  Perhaps, owners of teams that do not draw well at the gate should take a look at themselves and start to wonder if they are the right persons to own/run a baseball club. And they certainly must stop seeing a publicly funded ballpark as the solution for their problems. Why should the tax payer bleed for their mismanagement? If an owner can buy a baseball club, he must be able to pay for the construction of a new stadium as well. And if an owner must pay for his own ballpark he may stay in the city for a longer time because he realizes that he will throw away money when he will leave the stadium behind.

But it may very well be that the White Caps’ owners are simply a rare kind of breed.