Even though my mind wasn’t really in baseball mode after the crap that happened in Brussels yesterday, I still wanted to see the historic game between the Cuban national team and the Tampa Bay Rays. 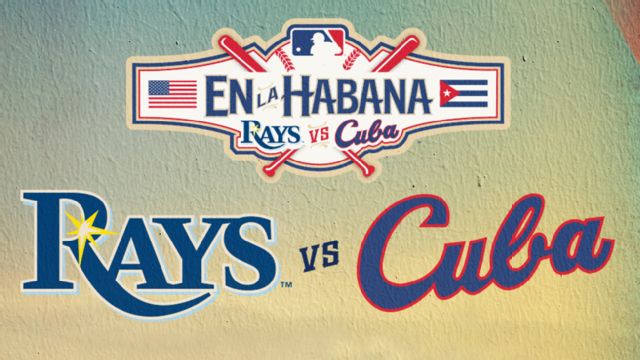 Overall the game itself wasn’t that exciting as the Rays were too strong without really flexing their muscles. The result also shows that Cuban baseball has deteriorated in the past two decades. Not only because of all the defectors but also because the highest league in Cuba is simply too big for the number of talented players. Back in the nineties, when Cuba played the Orioles, the team managed to win one game.

But I must tip my cap to ESPN for the way they broadcast the game. Normally I am not too fond of their announcers, but yesterday ESPN as a whole did a great job.

It was good to hear that they emphasized that during the days of the color barrier, Afro Americans were treated as normal human beings in Cuba and that the Cubans were way ahead compared to the USA in those days. It was nice to see how the widow of Jackie Robinson told about her memories of the days in Cuba during MLB Spring Training. It was also good to see how they treated her with the respect that she deserves.

Another revelation was that an MLB grounds keeper patched up the playing surface. The grass wasn’t playable before he started to work there. It seemed that the mound was way too high when he got there. Apparently all they could do was raising home plate to level it a bit. The story ended with the remark that the bags where the dirt was in, were not thrown away after they were emptied, because they could be used for something else. It reminds us once again how good we have it in the West compared to other countries.

I was surprised by the way that Victor Mesa, Cuba’s on field manager, was cheered as he stepped on the field. The guy is a pain in the ass, a real tyrant. His players are scared to death for him. But apparently he is a hero to the Cuban baseball fans.

For the Cuban baseball fans this must have been a great distraction from real life. You could see the joy that this game brought to them. I am also writing for a Cuban baseball magazine named Universo Beisbol. The narrator/owner (who also owns the blog) of this non profit digital magazine attended the game. But the trip was paid for by some musical group in the town that he lives in. It says a lot about the situation in Cuba right now. Recently, the parents of a colleague of mine went to Cuba for a round trip. Several times when they sat down at a cafe to drink a cup of coffee, they could not have any because there was no water. And then when I saw Fidel Castro’s son, Antonio, sitting in the stands, wearing an expensive suit and holding an iPhone 6, I got this feeling like “Hey buddy, how’s that possible? Your people have to deal with a water shortage and other discomforts/problems, and you are playing the big shot here? What went wrong with your revolution?”

But nevertheless, it was a good broadcast with all the attention that surrounded it. For once it was a good distraction from the crazy world that we are living in.