A fifty year old record in the NPB fell today as Rick van den Hurk clinced his fourteenth victory without recording a loss. The previous record for rookie pitchers and foreign pitchers stood at thirteen. In a close game Rick had a formidable opponent in Ayumu Ishikawa, who gave up only two runs.

In the matchup between the Chiba Lotte Marines and the Fukuoka Softbank Hawks, both starting pitchers kept the opponent on a short leash.
Ayumu Ishikawa of the Marines allowed only two hits through five innings, while Rick van

den Hurk was on no-hit course through five innings. Only an error prevented him from being perfect until then. Rick had a very good pitcher as opponent as Ishikawa had an ERA of 1.88 at the start of the game. Rick’s ERA was 2.14 at game time.

But the no-hitter was spoiled by Tatsuhiro Tamura, who hit to center field with one out and advanced on a sac bunt, laid down by Shohei Kato. But Van den Hurk struck out Shogo Nakamura for the final out of the sixth inning.
In the bottom of the sixth, the Hawks helped Van den Hurk as Yuki Yanagita hit a two run homerun off Ishikawa that cleared the left field wall.

Rick was flat out dominating as he threw only 95 pitches and struck out ten hitters. He gave up only four hits eight innigs and did not issue any walks. 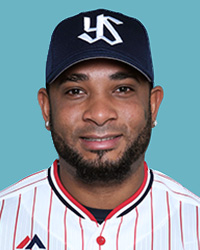 there is also another player from the Dutch Kingdom active in Japan. Curacao born Wladimir Balentien is back after two injury riddled seasons.  Today Wladimir got only one hit in four at bats, but that hit was a two run homerun. This was his tenth homerun of the season. Wladimir is hitting a good .315 so far this season.
In the game between the Hiroshima Toyo Carp and the Yakult Swallows, Balentien’s team (the Swallows) ended at the wrong side of the score as they lost 6-3.

Cool thing is that two players from the Dutch Kingdom are record holder in the Japanese NPB. Next to Van den Hurk with his pitching record, Wladimir is the season homerun record holder with sixty homeruns.