There is still news to tell about the extension of player development contracts.
This time from Las Vegas and State College.

The Las Vegas 51s (AAA, Pacific Coast League) and the New York Mets announced the extension of their PDC with two more years through the 2018 season.

51s President / COO Don Logan started ecxchanging the pleasantries with “The Mets have been a great affiliate for us in Las Vegas over the past four seasons. They have a tremendous farm system and the fans in Las Vegas have seen many of the Mets young stars play here at Cashman Field. Also, having Wally Backman as our manager over the past four years has been an added bonus. We are familiar with the front office personnel with the Mets. I’ve known  Mets GM Sandy Alderson for over 30 years and have worked with Special Assistant to the GM J.P. Ricciardi, and Terry Collins. They are all very familiar with Las Vegas from the time they spent here with other organizations as well as with the Mets. We are excited to extend our PDC with the Mets through the 2018 season.”

The affiliation between the two clubs started in 2013 when the New York Mets filled the void that the Toronto Blue Jays left as they went to Buffalo.  The Blue Jays weren’t happy at all and it seemed that the Mets signed with the 51s because no other AAA minor league team was left. But apparently the Mets are happy with what they get in Las Vegas.

Mets GM Sandy Alderson said “We are excited about continuing our partnership with the Las Vegas 51s and the city of Las Vegas, one which values equally player development, winning and community involvement.”

The history of the 51s dates back to 1919 when the Portland Beavers started playing in the Pacific Coast League. The team stayed in Portland until 1973, when they moved to Spokane to become the Spokane Indians. In 1983 the team moved to Las Vegas were they adopted the name Las Vegas Stars. Eventually in 2001 they club changed its name into 51s.

But there is also news from State College, PA. The Spikes (A Short season New York-Penn League) announced that they have extended the player development contract for two more years through the 2018 season. This extension is the second since the two clubs joined forces in 2012.

“Our relationship with the St. Louis Cardinals has provided a tremendous on-field product 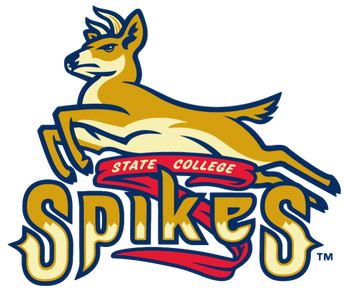 for our fans in State College over the past four years, and we are excited to continue the affiliation for at least the next two seasons. John Mozeliak, Gary LaRocque, John Vuch and the entire Cardinals’ organization are first-class partners, and we are grateful for their commitment to supporting the Spikes’ brand both at the ballpark and in the community”, said Spikes’ Chairman & Managing Partner Chuck Greenberg.

Since joining the Cardinals organization for the second time, the Spikes have been very successful. The club won three Pinckney Division titles and won the overall New York-Penn League title in 2014.

Cards GM John Mozeliak continued with the pleasantries as follows: “We have enjoyed our last four years in State College and are looking forward to many more. We are grateful to Chuck Greenberg, Jason Dambach, and Scott Walker as they provide a tremendous environment to our players to grow on and off the field.”

The Spikes play in Medlar Field at Lubrano Park. They share the ballpark with the Penn State Nittany Lions.