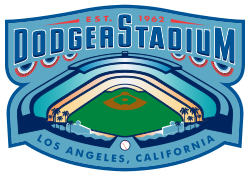 During my vacation in the US, earlier this year, my good friend Javier took me to Dodger Stadium for a tour. It is hard to believe that Dodger Stadium, erected in 1962, is the third oldest ballpark in Major League Baseball. It is a ballpark without the modern bells and whistles in which baseball fans come to see a ballgame instead of being enteretained in some kind of amusement park like facility, like many of the new ballparks are.

After Walter O’Malley moved his team from Ebbets Field in Brooklyn to Los Angeles, the team played at the Los Angeles Coliseum in the first three years. In 1962 Dodger Stadium opened its doors. The stadium was constructed in such a way that the stands rested on the slopes of Chavez Ravine. The concrete beams that support the three upper decks are dug into the slopes of Chavez Ravine, so no vertical

supporting beams were needed. This kept the stadium free from objected views.

Another novelty for those days was the possibility to change the stadium into a domed ballpark if wanted.

The remarkable part about Dodger Stadium is that the parking lot is located at the top level of the ballpark due to the way the ballpark was constructed. Unlike most (if not all) other ballparks you have to go down the ballpark to get to your seat instead of climbing stairs.

The construction of the stadium was privately financed after O’Malley got the ground, on which is was built, practically for free (at least against a very reduced amount). The original plan for the ground was a housing project but the ground was bought back by the City of Los Angeles for a strongly reduced price.

The area was inhabited by mainly Spanish speaking families who initially were unwilling to sell. Developers resorted to offering immediate cash payments, distributed through their Spanish-speaking agents. After the first sales had been completed, the remaining homeowners were offered lesser amounts of money, to create a community panic of not receiving fair compensation, or of being left as one of the few holdouts. Many residents continued to resist despite the pressure put upon them by developers. This led to the Battle of Chavez Ravine, an unsuccessful ten-year struggle by the residents to maintain control of their property.

Through the years the stadium has been maintained very well. Even though the stadium is 54 years old, it doesn’t show its age. In the seventies the original seats were replaced with seats in a colour palette of bright yellow, orange, blue, and red. During the most recent
renovation/expansion during the McCourt days, the color scheme of the seats was

brought back to the original pre 1975 colour scheme. The dugouts were moved forward as well to make room for more seats, 1,600 to be exact. The dugouts got a waist-high fence with netting for the safety of the players in the dugout.

In 2005 the rubberized warning track was replaced by a dirt warning track. More adaptions to the ballpark were the installment of a scoreboard from foul pole to foul pole along the base of the loge level.

The iconic hexagonal scoreboards in right center field and left center field remained but were adapted to modern standards in 2013. Next to the scoreboards, the concourse was widened and there were children’s playing areas added.

One of the latest additions is the all-you-can-eat pavillion in right field, which includes the Tommy LaSorda Trattoria.

There is only one thing that is lacking in Dodger Stadium. There are hardly any referrals to the Dodgers’ Brooklyn past. A mural in the top section of the ballpark and the 1955 World Series banner (next to the others) is about all. Inside building itself, there is a lot to see about the Brooklyn past. But in my humble opinion, the San Francisco Giants did a better job with referring to their  New York past on the outside and on the inside of their ballpark.

The tour will also bring you to the old visitors clubhouse which is still used at times.

And of course the tour will also bring you to the

Above and below, views from the Vin Scully press box

Despite the age of the ballpark there has never been talk about erecting a new ballpark (as far as I know). Why should there be? Dodger Stadium is loved by the fans and with every renovation the fans seem to flock to the stadium even more.

When Dodger Stadium will be maintained like it has been in the past five decades, it can easily last for five more.