Andrelton Simmons is still one of the best shortstops in the game. He is capable of the 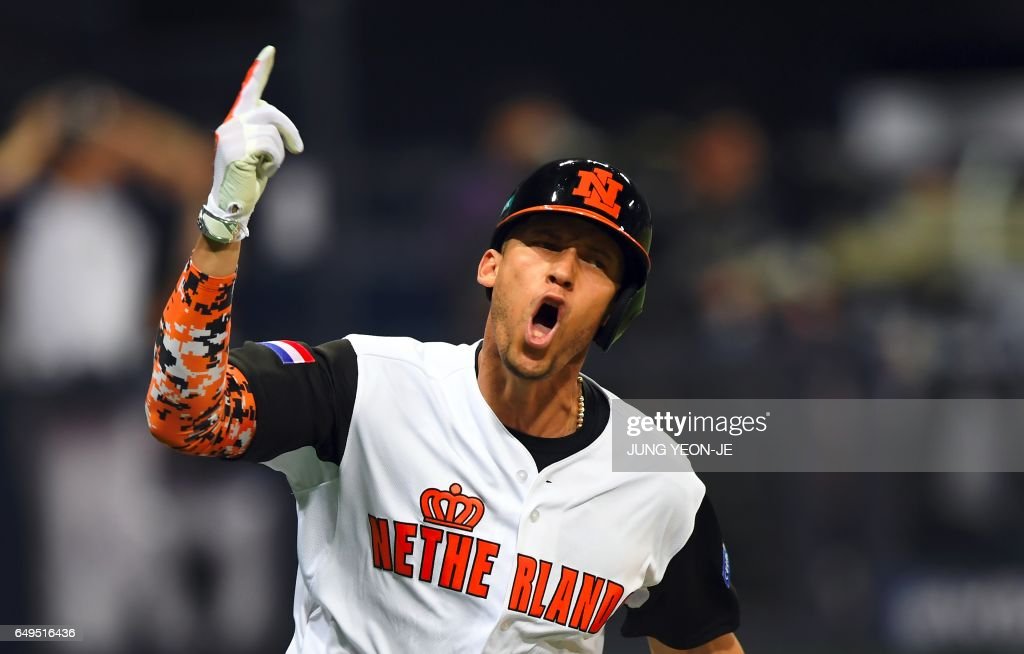 most amazing plays. In the past few years, his fielding percentage was in the .980s. So far this year with the Anaheim Angels, Andrelton has committed four errors, leading to a fielding percentage of .971. But the season is not even halfway, so he has plenty of time to improve this.
At bat, Andreltoin is having his best season ever so far. In the previous two seasons, his BA hovered around .280 but until now, his batting average stands at .350, a major improvement.  The best game of the 28-year old Curaçao native so far this season was on April 24 in Houston. He went 3 for 4 with a total of nine bases, two home runs, five RBI and two runs scored.

So far, Ademar Rifaela is having a good season with the Bowie BaySox (Baltimore Orioles). His batting average has dropped off late, but it is still at a nice .303. On May it stood at .355 but thanks to thirteen at-bats in his last four games in which he did not collect a hit, it dropped pretty much.
So far, the 23-year old Curaçaoan has played twenty-four games of which fourteen in the outfield. So in ten of those games, he served as a DH. Defensive wise, he is putting up some very good numbers as he did not commit an error in those fourteen games in the outfield.

After a good offensive season at A Full Season in 2016, Ray-Patrick Didder

was promoted to the Florida State League (A-Advanced). During his 2017 season with the Florida FireFrogs, he struggled somewhat as his batting average stood at .230 for the season. As a result, the Aruban native started the 2018 season at A-Advanced again. But once again he is struggling and so far his batting average is even lower than the one in 2017. In his last ten games, he went 5 for 30 (.167). He hasn’t been able to get his BA above .200 yet. In 24 games, Ray-Patrick has committed four errors so his fielding percentage stands at .962, slightly better than last year.

23-year old Curaçaoan Kirvin Moesquit is doing just fine at A Full Season level with the Delmarva Shorebirds (Baltimore Orioles). Since playing at A level, he is having his best season ever. In his last ten games, he hit .325, which raised his seasonal average from .258 to .284.
The fielding percentage of the second baseman is on the low side as he committed seven errors in twenty-six games (.938).

Wladimir Balentien is playing on another one year contract for the Yakult Swallows.
So far the 33-year old Curaçaoan is hitting .262, which is better than his average of last year. The slugger has hit 10 home runs so far with not even a quarter of the games played. So he could be on pace to reach the thirty home run mark again this year.
His best game so far this season was at May 3rd when he went 3 for 4 with two home runs, three RBI and two runs scored.

After the Dutch transition period, Kevin Kelly was approached by A.S.D. Rimini Pirates to play with them for the 2018 season. An invitation he decided to accept. So in the first season after the name change from Italian Baseball League to Serie A1, Kelly is joining the current Italian champion. Just like with his former Dutch club, Curaçao Neptunus, Kevin is used as a reliever. So far he appeared in four games, pitched three innings, gave up one run on three hits and two walks and struck out six. As a result his ERA currently stands at 3.00.